In response to the devastation caused by flooding in the wake of Hurricane Harvey in Texas Salty Dog volunteers have sprung into action. In conjunction with the United States Humane Society, the charity’s focus is on larger animals while local rescue organizations have been saving domestic animals in the affected areas. Horses and livestock that have been standing in water for long periods face river rot / rain rot unless they can be rescued very soon, which may lead to death unless treated soon. Rain rot is one of the most common skin infections seen in horses. The organism that causes rain rot appears and multiplies in warm, damp conditions where high temperature and high humidity are present. If left in standing water it can turn into river rot where the skin becomes so inflamed that it literally begins to rot and slough off. 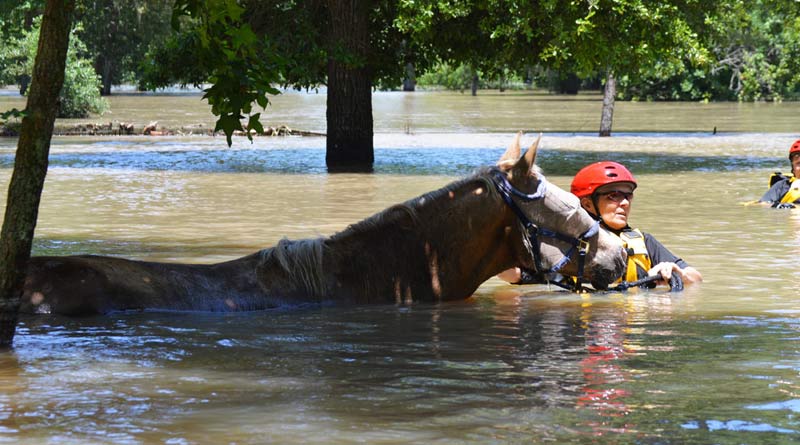 Volunteers from the charity will be departing late Saturday afternoon from Wellington, FL on a rescue mission to bring as many of the large animals back with them and treat those that are able to remain in Texas.

Other charities including the Humane Society of the US are working in tandem with local and state government agencies to ensure domestic animals are rescued from their homes and evacuated to safety. HSUS CEO Wayne Pacelle said: “At this stage during Katrina, we had no idea that the animal rescue would stretch on for seven weeks — a race against time in an evacuated city, also flooded to a remarkable degree. Who knows what this crisis will bring, and how long it will endure?”

Thanks to a grant from the charity’s founder, Clinton Cimring, we are pledging to use 100% of any donations received directly on the rescue mission. None of the funds donated will go to expenses faced in promoting the efforts and being a volunteer-based public-charity the organization has no paid staff members, to begin with.

If you are interested in helping to save the larger animals affected by the flooding in Texas please consider making a donation to Salty Dog Paddle. You may do so by clicking the Frenchie below or by visiting the Facebook Campaign HERE